PORT WASHINGTON, N.Y. – According to data from The NPD Group, more U.S. consumers are purchasing pre-packaged school supply kits this year than in previous years, when the kits are made available to them. These kits are traditionally offered via a school’s PTO/PTA organization, notifying parents or guardians of the option to purchase all their children’s school supplies through one site. Recently released data from The NPD Group’s Back-to-School Report shows that approximately one in four (27%) consumers are offered pre-packaged school supply kits by the schools their children attend. And among those who have access to the kits, 61% said they have opted to purchase the kit this year, up from 55% last year.

“Consumers who purchase kits are primarily doing so because of the time savings,” stated Leen Nsouli, executive director and office supplies industry analyst, The NPD Group. “And while convenience certainly plays a role as a purchase motivator, we’ve noticed that most aversions to purchasing pre-packaged kits stem from the desire to involve the student in the selection process as well as kit pricing.”

The majority of consumers are still purchasing their back-to-school supplies in-store; however, data shows that consumers are seeking out the convenience factor and moving more of their purchases online, inclusive of pure-play online retailers, traditional retailers, and those offering the pre-packaged kits. 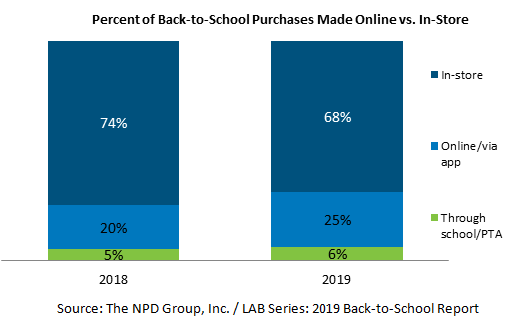 Overall, back-to-school season sales are down -3% season-to-date due to a confluence of factors. Driving the decline is a nearly 14% year-over-year deficit in glue sales. As has been the case during many previous back-to-school seasons, pencils, folders and notebooks still comprise the most popular office supplies categories.

“Warmer-than-usual spring and summer months throughout the country caused retailers to run longer summer seasonal promotions, one factor contributing to slower back-to-school sales. Additionally, I believe  teachers may have released their school lists later this year, and as a result  school supply list-related categories are tracking behind where they were during the same timeframe in the 2018 back-to-school shopping season,” added Nsouli. “The latest data is showing positive sales growth in mid-August, and we expect to see more positive results heading into the early part of September.”